Day 109: Hamburg, PA to Eckville Shelter, 14.5 miles. We took it slow in the morning and ate as much continental breakfast as possible, watched as many extra minutes of HGTV as we could justify. It felt like it took forever to get a hitch, standing in the sun, but finally a guy in a pickup stopped. Lots of climbing to do out of town, and it was a hot day. It thundered and clouds gathered all afternoon, then it finally stormed late in the day. Our feet got wet but that’s all, and it cooled down. The shelter was down a road and had a caretaker, shower, flush toilet. The bunkroom was kind of gross, so we tented in a nice grassy field across the street instead. I did take a nice solar shower.

Day 110: Eckville Shelter to Bake Oven Knob Shelter, 17.4 miles. It was a long stretch without water today, and our final destination had only unreliable water indicated. Luckily there was a restaurant .2 off the trail midday. Going there to eat lunch and fill up from a sink quickly became everyone’s plan. By “everyone” I mean Honeybun, Dos Equis, So-crates, Animal and us. That’s the group we’ve been seeing lately. I love hiking around Honeybun because she reminds me so much of my Aunt Carol, even her voice 🙂 And her son, SoCrates, is really witty. We all had a decent but pricey lunch, with an interlude of the waiter pouring Coke all over my phone and not acting anywhere near concerned about it (it’s fine). We let our shoes dry in the sun while we ate, then hit the trail for more brutal rocks on our way to the shelter. The shelter’s water was way, way downhill. Eric and Animal basically lost all the elevation we’d gained to get up to that ridge, got the water, then did the climb again. It was rough. It was cool that night though, very cool, and we slept well.

Day 111: Bake Oven Knob Shelter to campsite at mile 1259, 13.1 miles. Today we had a hyped feature, the climb out of Lehigh Gap. It’s a steep rock scramble at parts and follows a deforested ridge with expansive views down on the zinc smelting factory that’s responsible for it all. It was fun climbing the rocks and the views were impressive, but the walk along the exposed and brushy ridge in the sun wasn’t my favorite. Luckily, another restaurant was not far off the trail later in the day (why carry food at all??). And they had milkshakes. And once again we really needed water. So we ate town food, then hiked just a little past the road until we found a passable campsite.

Day 112: Campsite to campsite at 1275, 16 miles. We walked a long and rocky ridge all day. It was tedious and tiring despite being flat. I listened to an audiobook, Think Like a Freak, for three solid hours and that was wonderful. In the afternoon we went down into Wind Gap, where there was, yet again, a restaurant. Eric and I split a big plate of nachos and some wings. Heavenly. We did need water from there again, and there is water in margaritas. No one could believe we were hiking back out since the restaurant would let hikers camp out back for free and cook breakfast, also for free, in their kitchen in the morning. That didn’t happen until 9am though, and we like to be well on our way by then. We had our eyes set on getting into New Jersey so we could zero and Eric’s friend’s house. So we pushed on, did a steep climb slightly drunk on full bellies and crashed hard.

Day 113: campsite to Delaware Water Gap, PA, 14.6 miles. Again, rocky ridge. What else is new these days? The past forty miles or so had been the worst of the rocks by far. After lunch the trail let up a bit and we were able to get some speed going. We got into town midafternoon and took advantage of the market’s $2.50 hot dog and slice of pie deal. The pie was delicious! We spent the night in a weird motel. When we first got there a man was in the lobby chatting with the front desk lady, and he got very animated when he saw us. He was bouncing up and down, like, “Hey, hey, you guys are up there on that trail huh? What do you do for energy up there? You do crack?” and I was like, no but I bet you do. Animal and I have a strategy of just letting Eric talk to the crazy people. “Something’s going on up there on that trail,” he told us. “I’m going to come back here tonight and buy you dinner.” And with that he ran out. We looked at the other lady and she just shook her head and said, “He’s not going to buy you dinner.” The motel featured a “Plant Room”, which was a room full of plants, but it was only open from 10-6, so the plants don’t take visitors all the time. Animal shared the room with us so it’s good he’s also an HGTV fan.

Day 114: Delaware Water Gap to Mohican Outdoor Center, 10.8 miles. We went back to the market for breakfast and had delicious sandwiches made with their fresh baked bread. We also got some zucchini bread to pack out with us. We were ready to leave at 10, but then another episode of House Hunters came on, so we stayed until 10:30. It had stormed overnight and wasn’t so hot luckily. We walked along the highway for awhile (and crossed into New Jersey!) before climbing up to Sunfish Pond, which was beautiful. I look forward to seeing more large bodies of water like that. We got rained on for three minutes, then the rest of the day was beautiful hiking in lovely weather along a pleasant ridge. There were still rocks but they were definitely better. We were loving New Jersey already. We’d banked on getting deli sandwiches at the Mohican Outdoor Center, but when we got there, they were out of food except very expensive soft drinks and candy bars. That was a bummer; I’m still forgetting not to count on stuff written in the book existing in reality. We hung out there eating ice cream sandwiches instead, then hiked back to the trail and camped. We’d thought we had only 12 miles to hike the next day to get to the lake house where we planned to zero. But then Eric told us we actually had 18. Double bummer. 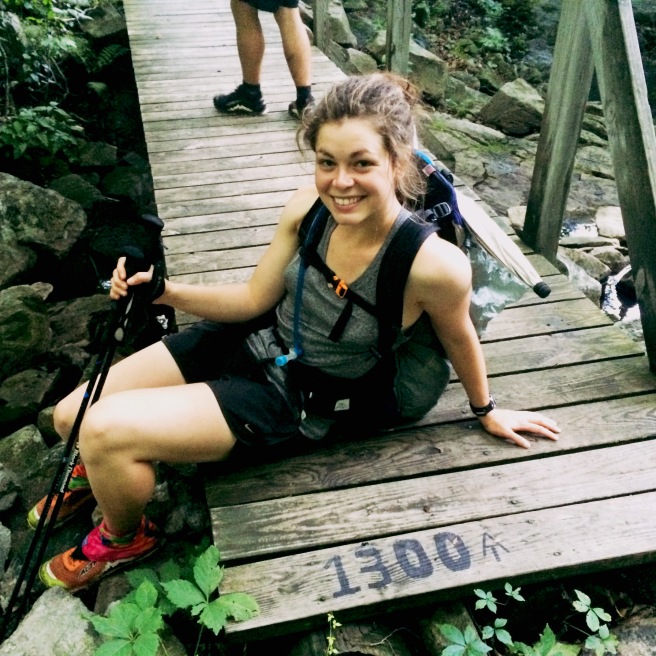 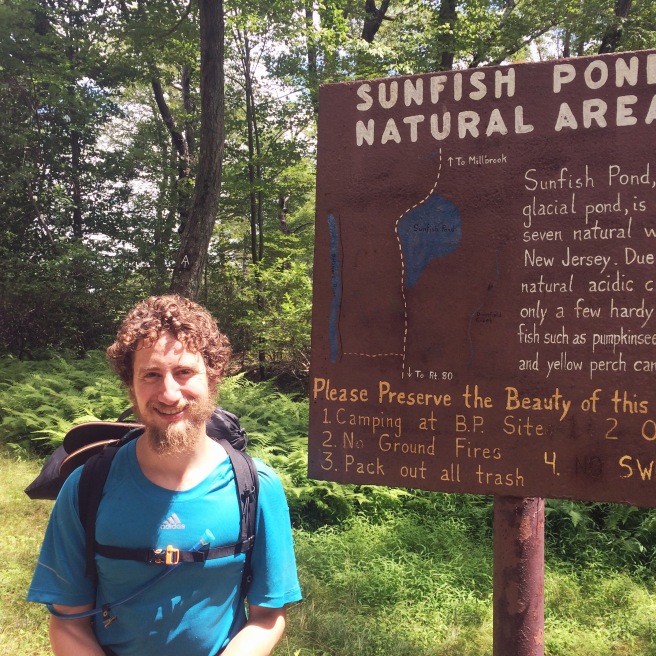 Day 115: Mohican Outdoor Center to Brink Road Shelter and the lake house!, 14 miles. In the morning we got a message from Maureen, our lake house host, telling us about an alternative place to get off the trail and hike to her house. Taking that would give us only 14 for the day instead of 18. We were very pleased. It was more lovely hiking in excellent weather. We passed by two swamps and did a little bit of climbing. I hadn’t realized how accustomed I’d become to just walking on the flat ridge all day. It might be easier in some ways, but it’s also boring. When we were climbing our hills today the time seemed to go by faster. It was our third wedding anniversary, so we stopped to take our traditional photo on one of our first ridges in NJ.

Day 116: zero at Maureen’s lake house. We spent today being super lazy after an amazing dinner last night, complete with wine made by Maureen’s boyfriend. We did laundry and watched Lord of the Rings. Eventually we dragged ourselves out to buy our food for the next leg. Driving in the car made all of us feel kind of sick. So when we got back, we went to the lake across the street and spent some time swimming, jumping off the dock and lying in the sun. It was awesome. I’d love to have something like that to swim in someday. We made a big taco feast for dinner, and tomorrow we continue the adventure in Jersey!