Day 91: Thornton Gap to Hogwallow Flat // 17.8 miles. By some miracle we got back on the trail on an excellent, cool day and cruised through some easy hiking. I really couldn’t believe the weather. It was so nice, we did more miles than we planned and got a really nice stealth spot (for Shenandoah). Day one of Operation Catch Animal complete! It’s actually really difficult to catch up to someone when they get such a head start on you. I’m not actually doing the math because if I did I’d probably give up.

Day 92: Hogwallow Flats to Manassas Gap shelter // 20.4 miles. More usual Virginia hiking. The Green Tunnel for sure. We got a pint of ice cream each at the Cabbin hostel instead of eating lunch. Late in the afternoon we got to a shelter with an outdoor solar shower. There was nothing solar about it, but it felt good to stand under a deluge of cold water. Feeling refreshed, we left there and went up a big hill to camp.

Day 93: Manassas Gap to Sam Moore Shelter // 19.8 miles. Easy hiking all morning, but the looming Roller Coaster section was bothering me. It’s 13.5 miles of constant, steep up and down, I think they packed twelve peaks in there. I just really, really didn’t want to go through it, but there was nothing else to do. I’m not sure why I was getting so worked up about it; when we saw the sign signaling the start I even felt a pit in my stomach, but I managed to smile to take a picture! We did the first half of it, and then got to camp exhausted. My brother, who had been hiking south towards us from Harper’s Ferry, met us in camp that night. It’s awesome but so weird to have my brother here! Scout and Yogi came in too, and we hadn’t seen them in a long, long time! We found my brother wasn’t packed very well. He didn’t have a sleeping bag, but he did have four bug sprays.

Day 94: Sam Moore to campsite at 1015.5 // 19.4 miles. Intense hiking right off the bat as we finished the roller coaster. My brother was repeating what he’d done the day before, and the ankle he sprained last week was starting to bother him. Grabbed another solar shower, warmer this time, at the Blackburn AT Center, then hiked to a highway intersection with a pizza restaurant visible. We decided to go there. When we walked in, the TV was turned to the Weather Channel and the weatherman was talking excitedly about a big thunderstorm about to happen. The locals sitting at the bar shouted to us, “Are ya’ll out on the trail? You better keep your head down!” We were confused. But then while we were eating our pizza the sky suddenly went black and a crazy thunderstorm came in. Peep Show was supposed to meet us at the pizza place, and he hadn’t turned up yet. We worried about him and anyone else out on the trail, because trees were coming down and lightning was hitting hard. We texted Animal to see where he was and he said he was hunkering down in a concrete bathroom at a hiker camp on the other side of Harper’s Ferry. The electricity went out so they shut the restaurant down. Once it blew through we hiked two more miles (with beers) through the post-storm destruction to camp. There was debris and trees down everywhere. We were so, so lucky we just happened to get to the pizza place when we did!

Day 95: campsite to Dahlgren Campground // 21.3 miles. Got up and got into Harper’s Ferry early. We registered and took our photo at the ATC headquarters. While we were waiting outside for my brother to pick us up a man approached wanting to interview us for his radio show. So we did it, and my brother even got in too when he showed up. Then we went in my brother’s car for breakfast and a resupply run. We looked at the book and saw if we did 17 miles this afternoon we could camp tonight at the place Animal had been last night, and close the gap to only one day behind him. It was an insane idea, but we left my brother at 2:00pm to start the 17 miles. His ankle hurt too much, but there was a parking lot near the campsite so he went to see some Civil War sights and then drive to the camp with sandwiches for us. Got to camp at 9:45, totally exhausted, and found my brother chilling and drinking beer with the other hikers. And he had Subway! I could get used to this supported thru-hike thing. 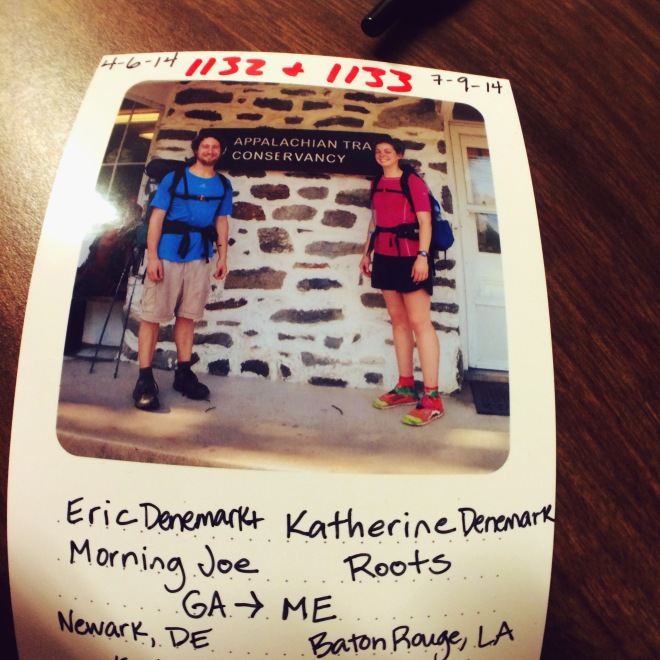 Day 96: Dahlgren to Wolfsville Road // 14.2 miles. My legs felt like two blocks of cement in the morning. We walked to my brother’s car so he could get some stuff before hiking on a little bit with us. While we were sitting there he played some music, and it was surprisingly awesome to hear music from external speakers instead of my earbuds. I wanted to sit there and listen for hours! But on we went. I was really feeling it, all the miles we’ve been doing lately. This is the most we’ve pushed ourselves so far. The trail was rocky and my feet and legs were killing me. They were getting swollen stretching my skin so much that I also had a crazy rash from my knees down to my feet. Late in the afternoon they were so swollen I couldn’t hike anymore. Luckily we were able to call my brother who was nearby, and he met us at the next road crossing. As we were coming down the trail to his car it was about to start raining at any second. I wanted to get in the car s badly before it rained, and I could see the car through the trees, but I just couldn’t get myself to walk faster. Eric got down there, then ran back up and got my bag. We slipped in the car just before rain started to fall! We drove to a nearby motel in Hagerstown. When we asked if they had a thru-hiker rate the front desk lady looked at us like we were crazy and said, “I’ll just give you the AAA rate” just to get rid of us. We took it easy that night. I just sat in bed icing my legs while Chris and Eric went out and got burgers and more KT tape for me.

Day 97: Wolfsville Road to Deer Lick Shelter // 15.7 miles. I went to bed not sure how I would be in the morning, but when I woke up my legs were normal size again and felt surprisingly ok. Message received, body. We parted with my brother again, and hiked to Pen Mar park excited for sodas. Instead, we found a different company had taken over the lease and hadn’t installed new machines yet. Once again luckily, Chris was in the area and brought us sodas at a road crossing before hiking on with us to camp.

Day 98: Deer Lick to Quarry Gap Shelter // 15.8 miles. My brother hiked with us up to a view in the morning, then turned back. We got word Animal was spending the day at a state park just a few miles ahead. He waited until I’d proven I was willing to sacrifice my legs to catch up to him, then spent a day hanging out at a pool to let us close the gap 🙂 The hike was pretty boring, but then we emerged into the state park and there were tons of people. Kat, whom we first met back before McAfee’s Knob, was there too. We all hiked to a very crowded but fancy shelter. It even had hanging potted plants and actual landscaping around it. We camped further into the woods to be away from the people, but we were camped next to a guy who had a dog that couldn’t get used to us. Every time we walked back up to the tent it would bark and go crazy, then sniff us and remember it knew us and everything was good. But if we walked away ten minutes later, whole drill all over again. 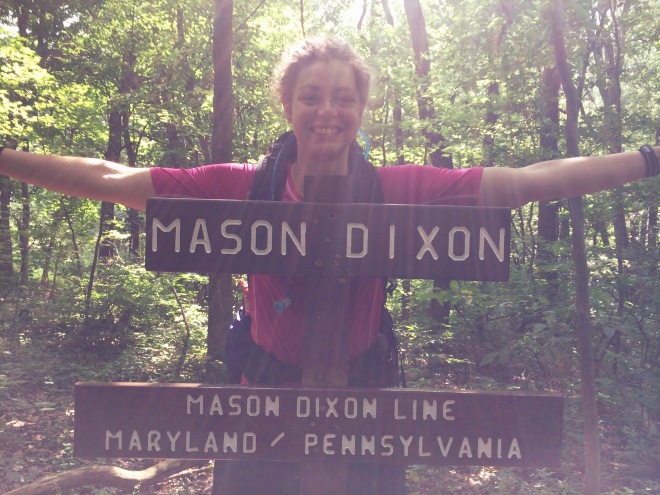 Day 99: Quarry Gap to campsite at 1101.8 // 20.8 miles. Did a fast morning push with Animal and Kat. It’s different to hike their hike–very few breaks. I usually take at least one before lunch so it’s certainly something new to just keep on going. We saw a rattlesnake, then the halfway point. The “halfway point” feeling is strung out because first we reached the 2014 halfway point, then the halfway point memorial that doesn’t move year to year, then the halfway point of the original AT. We made it to Pine Grove Furnace State Park but had missed Kat doing the half gallon ice cream challenge. We ate a lot of ice cream (though not a half gallon) and filled up on cheeseburgers so we wouldn’t have to cook dinner that night. There was a little lake with a swimming beach that I was very tempted by, but it was super crowded (the only time I know it’s a weekend) and I didn’t feel like trying to go through a changing and drying off routine in front of a crowd. Arrived to camp exhausted and utterly soaked in sweat. Animal calls it “slimed”, which is really apt. The grossest I’ve ever been, I think. 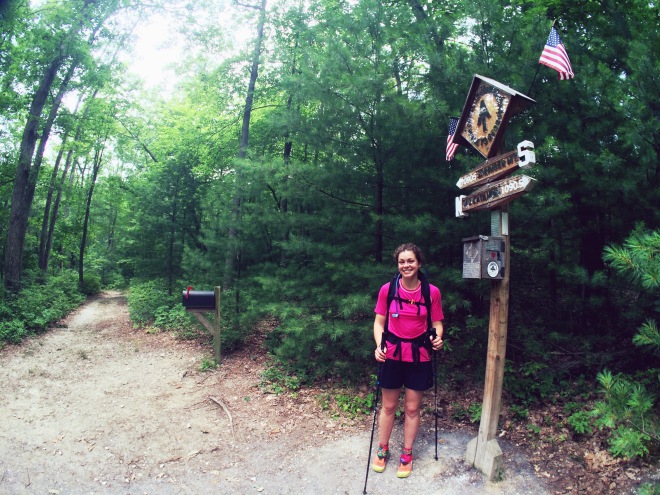 Day 100: campsite to Boiling Springs, PA // 15.7 miles. Hiked quickly all morning again, then slowed down for the last big hills before town. Animal entertained us by singing sugar songs (“Pour Some Sugar on Me” on the way up and “Sugar We’re Going Down” on the way, uh, down) and occasionally dancing a little. We emerged into a corn field and valley-walked into town. Kat and Animal came to our room to shower. Best shower of my life, but when I walked back into the room the stink of everyone else and their gear hit me like a truck. I feel so sorry for all the clean people who have endured car rides with us! Animal went to stay at a friend’s house and Kat hiked on. The TV doesn’t get HGTV, which is our new favorite channel (homeless people obsessed with watching shows about houses, of course). It only got old black and white movies. Bummer.

Day 101: zero in Boiling Springs. We were staying at this weird resort/theater combination called Allenberry. Unfortunately it was Tuesday, which is the only day when they don’t put on any plays and all the restaurants are closed. It was a doable but slightly long walk down a really busy road into town, and then another mile from there to the grocery store. Luckily Eric’s mom had a friend nearby who had offered us help, so we took her up on it and got a stress free ride to resupply and then back to the motel. We spent the rest of the day relaxing, watching old movies on our room TV, then migrating to the basement where we found another TV that could get HGTV. Nothing beats an easy resupply and hours of Fixer Upper.

Day 102: Boiling Springs to Darlington Shelter // 14.3 miles. A big cool front came in and took out a lot of the humidity, so today was really pleasant. We walked through the Cumberland Valley all day, along endless corn and soybean fields and crossing tons of roads. It is incredible to look around and see nothing but land being cultivated by people to grow massive quantities of just two things. It was easy hiking, completely flat, something that never ever happens. We’re camped tonight with Fivel and Little Foot, whom we haven’t seen in ages. Animal stayed behind for another zero today, but we’re sure he’ll catch up to us quickly–he’s fast.