Day 44: Vango/Abby hostel to Laurel Falls // 13.5 miles. Hiked on from the hostel in the morning, looking forward already to getting to Hampton for more real food. Very hungry lately. We arrived at Laurel Falls. The book warns not to swim in it because people drown there, something about currents at the bottom. Normally I would be tempted anyway, but it was too cold. We found a nice spot downstream, near the water, and decided to try out cowboy camping (not setting  up your tent) since the weather was nice. I slept well, so well in fact that I didn’t hear a creature come into camp sometime during the night and steal two gaiters and a sock.

Day 45: Laurel Falls to Pond Flats plus side trail into Hampton, TN // 6 miles. Town days are usually hectic, and this one did not disappoint. We left camp early and hiked the side trail to the road into town. We had gathered all the things we wanted to buy at the local market, but then Eric saw the owners plug in the credit card machine they’d told us was broken to let a local customer use it. We didn’t want to pay the ATM fee to get cash after we’d seen that, so we put everything back and walked down the road to the Dollar Store. Normally I’m all about supporting local economy, but not when they’re being tricky. After resupplying we ate lunch in a little diner while charging the phone. The ladies in the kitchen were talking loudly about their niece’s problems in school with pooping her pants and not doing homework. You never know what you’ll get in town. A man came over and started a conversation with us and eventually offered a ride. He also offered to bring us two miles further down the road so we could skip a pointless climb but we declined. He wanted to take a picture with us on his disposable camera, so we let him. Then we hated on that poor stupid mountain the whole pointless way up. We stopped early because we felt like it. Mad Max camped with us and tried to unload some extra food on us, but we declined that as well since we were freshly resupplied. Got bitten up with bugs that night.

Day 46: Pond Flats to bog campsite // 16.1miles. Interesting walk around Watauga Lake and dam. There were lots of signs warning about bear activity, both official and hand written. After leaving the dam we came around a corner and saw trash everywhere, and a group of people picking it all up. It turned out to be Botany and Pending, friends from the Smokies, and their friends. I still was thinking they were just picking up trash like super good samaritans, but actually it was the remnants of their food bags, which a bear had ripped up in front of them, paying no attention to their shouts and thrown rocks, the evening before. We offered them some of our food, but they had plans to meet up with family at the next road and get more. We weren’t too keen on camping at a place the book called a “bog”, but it wasn’t that bad. 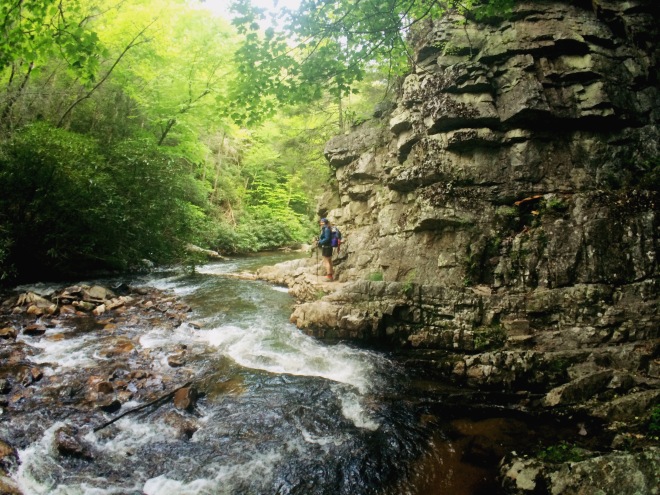 Day 47: Bog to Abingdon Gap Shelter // 18.9 miles. Started the day in rain after a big thunderstorm and I thought it would be a terrible day. But it cleared up after not too long and we found a trail magic box I knew existed but wasn’t sure where. It’s a big orange metal box with crucifix cut-outs I’d seen on many blogs and in documentaries. I’d purposefully avoided learning exactly where it was located, even which state, so it was fun to get surprised by it. We ate some snacks and sodas there, then hiked on to camp at a shelter. A big group of loud guys came in. They’re thru-hikers, but weird ones. They had machetes they used to chop up huge logs for a giant fire, and a couple of them just had a tarp for shelter. It rained hard that night too, so I wondered how they were doing out there.

Day 48: Abingdon Gap to Damascus VA // 9.9 miles. In the morning it was wet but not raining anymore. We had a quick easy hike across the border into VA and then down into town! I feel like getting to Virginia starts a new phase of this trip. We’ll be in this state for quite a while–a 1/4 of the trail is in VA–and the summer will probably start hitting us hard here. It’s been way, way too long since we’ve done laundry or had a shower. A guy sitting outside of the outfitter looked at us and said, “Man, you guys need laundry.” We laughed and agreed and went inside to get a room in the hostel across the street. The man behind the counter immediately said, “Ya’ll need a shower.” Yes again. The hostel was pretty dingy and except for the raw wood walls instead of concrete, it reminded me a lot of a prison. It’s just a wooden platform for a bed so we still need to use our sleeping pads and bags. We showered in the shared bathroom. I kind of hate it because everyone else here seems sick, and we’ve started to hear rumors of norovirus, which obviously we want to avoid big time. Met up again with Dos Lekis and Nuke, who came into the Roan Mountain shelter nearly hypothermic after everyone else had hiked on into the storm.

Day 49: Zero in Damascus. We’re starting to realize we need to be more careful about good nutrition in town, so when we did our resupply at the grocery store we made sure to load up on fresh veggies and juice and avocados to eat today. We finally realized a frequent trail dream of rotisserie chicken and shandies for lunch. It felt good to eat some fresh food! We spent much of the day hanging out on the porch with hikers that came and went, chatting and snacking. In the evening we got barbecue that came with a free piece of cheesecake. Seemed odd but I ate it!

Day 50: Damascus to Creeper Trail AT split // 13 miles. Took the advice of some locals and hiked the Creeper Trail out of Damascus along the river. Beautiful hiking and funny to have endless Memorial Day vacationers riding bikes downhill. Was surprised by a small cafe in a little valley village, stopped to eat our lunch and got root beet floats. Ended up at an incredible campsite. It was a small flat clearing right by the river, with a bench and a wooden pier for fishing. It was of course too good to be true that we would have it to ourselves. Apparently we were near a road because after a while a young couple showed up with their three year old. They were lugging ice chests full of snacks and soda. They let the kid entertain himself by giving him a hammer (a real one) and letting him bang on rocks.

Day 51: Creeper Trail AT Junction to Deep Gap // 12.1 miles. Neither of us felt great in the morning, and it seems like we caught the hiker cold from the hostel in Damascus. We took it slow all day and ended up stealth camping (camping in an unofficial spot) in a clearing just below Deep Gap. 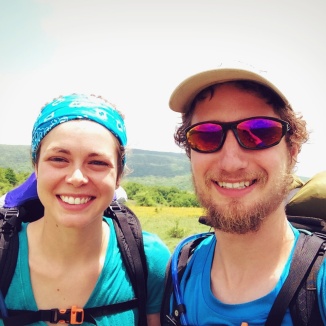 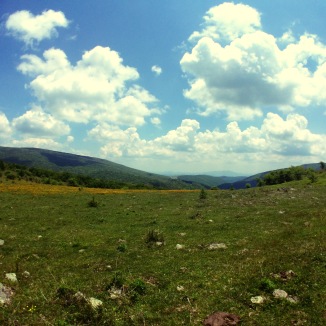 Day 52: Deep Gap to just past Thomas Knob Shelter // 2.6 miles. This morning we both felt really sick, and it started to rain just as soon as we finished packing up. We were not up for that, so we quickly set the tent back up and brought all our stuff inside. Rain grew slowly into a light thunderstorm. It was boring in the tent after awhile, but we decided to wait the storm out so we would have good weather in the Grayson Highlands, where the wild ponies are. I’ve been looking forward to seeing these ponies for so long, I don’t want to finally do it in a downpour. It rained for a long, long time. Finally, about 3:00, we packed up again and moved just a few miles up onto the Mt. Rogers ridge, to a nice campsite just past the shelter. At the shelter, by the way, was a family with three kids, aged maybe 9-12, attempting a thru-hike. Bravo, them. After we set up camp we went walking a little more up the trail to see if we could find a pony. We found one, but he wasn’t very interested in us. It was cold and very windy from the storm blowing out.